Real House Canada is the first pharmaceutical R&D team in Canada to develop a unique formula of NMN combined with a variety of important anti-aging factors in the human body to launch this highly effective Real • Unique NMN 1,2000mg™ – Youth Fountain product. Our unique formula not only includes a high dose of NMN and an effective ratio of NADH, but also adds active ingredients: Nicotinamide, Glutamine, and Pterostilbene to formulate a superior product that aims to optimize the function of human cells and try hard to slow down the aging process in humans.

Mitochondria are our cell’s energy dynamos. NMN is the precursor of (NAD+) and NADH biosynthesis. Both NAD+ and NADH are the main coenzymes of the redox reaction system in the process of cell metabolism to produce the energy required by the mitochondria to allow the body to function normally and actively. NAD+ (nicotinamide adenine nucleotide) is a molecule (coenzyme) present in all living cells and is essential for regulating cellular aging and maintaining normal body function. Over time, NAD+ levels in humans and animals decrease significantly. “NAD+ is the closest we’ve gotten to a fountain of youth,“ says Dr. David Sinclair, co-director of the Paul F. Glenn Center for the Biology of Aging at Harvard Medical School, “It’s one of the most important molecules for life to exist, and without it, you’re dead in 30 seconds.” In a study published in the journal Science in March 2017, Dr. Sinclair and his research team added NMN, a compound known to increase NAD+ levels, into the water fed to a group of mice. As a result, the NAD+ level of these aged mice has significantly increased making them look and behave younger and lived longer than expected. 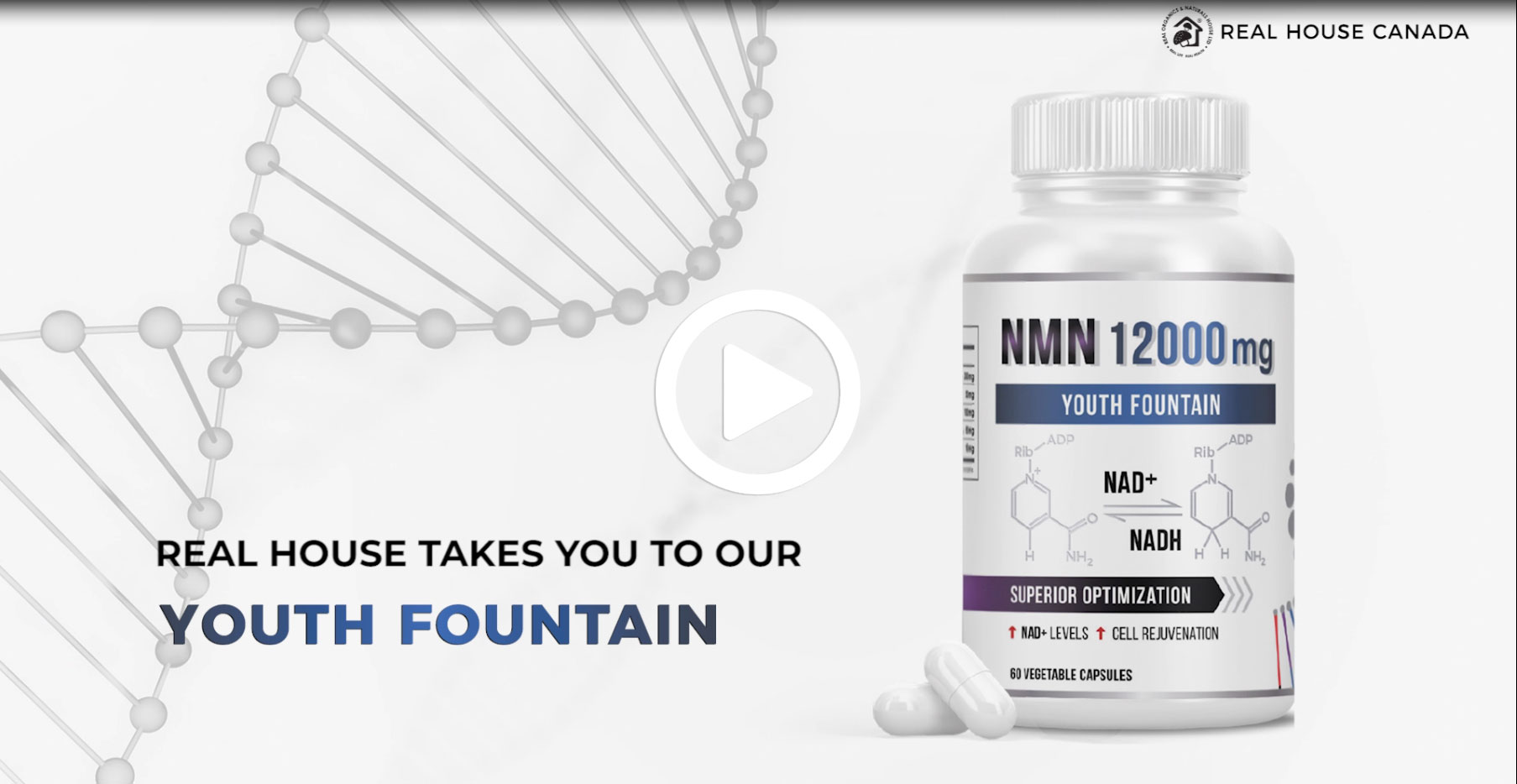 Recommended Use: Supplement NMN as a precursor of human NAD+, promotes healthy aging, and makes your day full of energy. It also contributes to healthy metabolism and maintains the body’s ability to metabolize nutrients.

Nicotinamide mononucleotide (NMN) is a derivative of the B-vitamin niacin that dramatically improves health and longevity by serving as a precursor to NAD+, a compound that plays a crucial role in energy production, metabolism, and gene expression in the body. NAD+ acts as a coenzyme and as a substrate for multiple signal reactions, participating in hundreds of reactions in the human cells. When we boost NMN levels in the body, we can enhance the biosynthesis of NAD+ and alleviate symptoms associated with the depletion of this crucial nutrient. 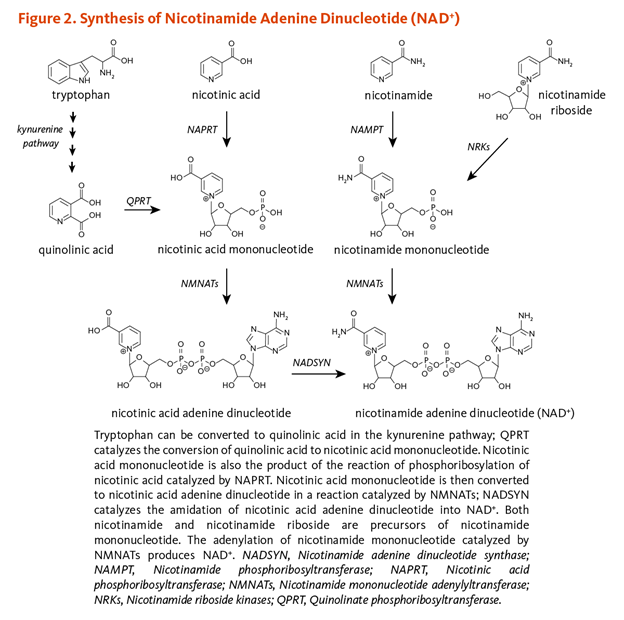 Niacinamide (aka nicotinamide) is derived from niacin. The body has the ability to convert niacin to niacinamide. However, there are some critical differences between these two vitamin B3 components. Niacinamide can also be made by our body from an amino acid known as tryptophan. High niacin doses can cause flushing, which is a condition that causes blood vessels to widen. This makes the capillaries under the skin expand to allow more blood to flow, causing the skin to become red and itchy. Niacinamide does not have the effect of skin flushing, and that is why it is preferred over niacin in the treatment of pellagra. Some niacin is converted to niacinamide, and some niacinamide is converted to a compound called NAD. Directly taking niacinamide helps “shortening” the pathway, hence speeding up the process.

Nicotinamide, a form of vitamin B3, is a critically important part of the structures of NADH and NAD+, where the N-substituted aromatic ring in the oxidized NAD+ form undergoes reduction with hydride attack to form NADH. It is preferred for pellagra, caused by niacin deficiency. While niacin may be used, nicotinamide has the benefit of not causing skin flushing. Nicotinamide is on the World Health Organization’s List of Essential Medicines, the safest and most effective medicines needed in a health system.

The mechanism by which glutamine supports cell proliferation and regulates cell cycle dynamics includes its regulation of DNA and protein biosynthesis rates. Glutamine is routinely added to the cell culture medium, and its importance for cell growth has been determined. 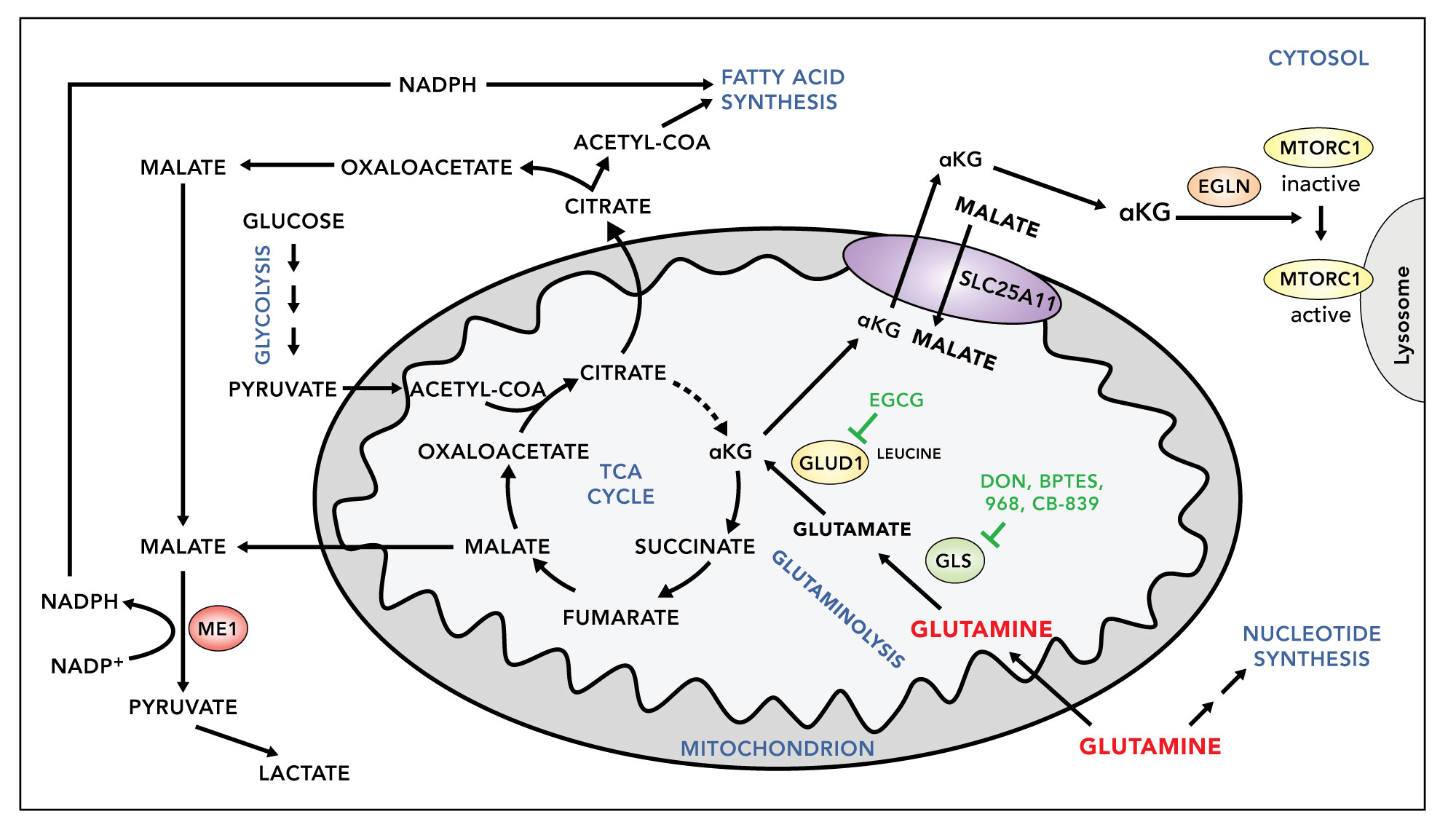 Oxidative stress is characterized by an imbalance between the production and elimination of cellular oxidants, which damage the basic components of cells (including proteins, lipids, and DNA), interfere with homeostasis, and lead to various adverse consequences (Schieber and Chandel, 2014; Wu and Ni, 2015). Reactive oxygen species (ROS), a marker of oxidative stress, is mainly produced in the mitochondrial electron transport chain during cell metabolism and plays important role in cell biological behaviors, such as proliferation and apoptosis (Cameron et al., 2019). Recent studies showed that ROS increases the pyroptosis of VEC that contributes to VEC dysfunction and progression (Wu et al., 2018; Zhaolin et al., 2019). Lowering oxidative stress injury induced by ROS is considered a promising therapy to inhibit the progression of As (Burtenshaw et al., 2019).

Animal studies have found that Pterostilbene, as a strong antioxidant, is absorbed by human blood four times higher than resveratrol. Its utilization rate of biological activity in the human body is 80%, while that of resveratrol is only 20%. According to research, Pterostilbene  is the protective cap of the telomere at the end of the DNA chain. As we age, telomeres will naturally start to break down, and Pterostilbene can enhance the enzymes that protect telomeres.

NADH is made in your body from niacin, a type of B vitamin. At various chemical reactions, the NAD+ picks up an electron from glucose, at which point it becomes NADH. Then NADH, along with another molecule flavin adenine dinucleotide (FADH2) will ultimately transport the electrons to the mitochondria, where the cell can harvest energy stored in the electrons. The amount of NADH is directly related to the amount of ATP produced. The more NADH each cell has, the more energy it produces. Organs that require more energy have (or require) more NADH. 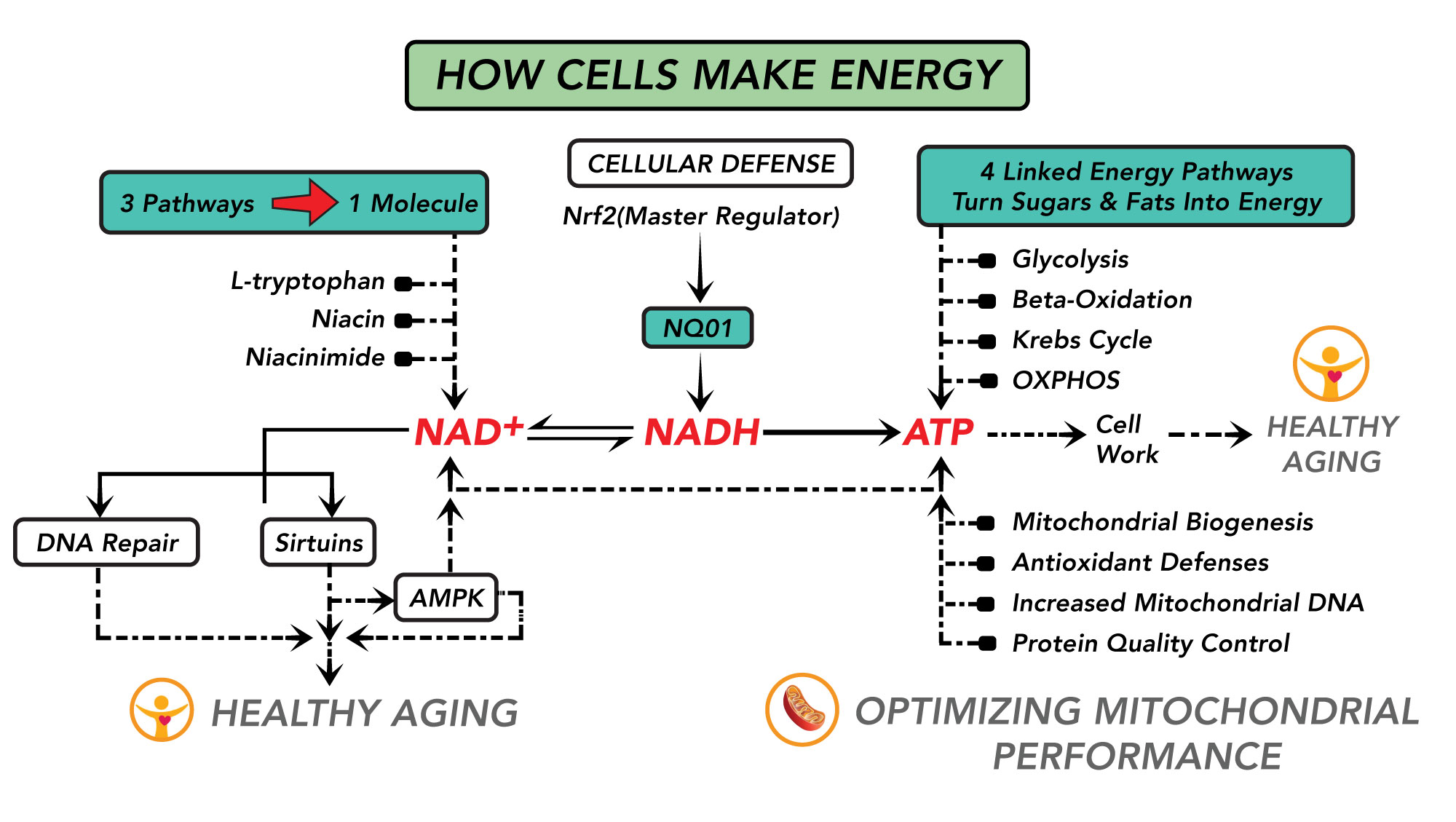 In metabolism, NAD facilitates redox reactions, carrying electrons from one reaction to another. This means that NAD is found in two forms in the cell; NAD+ is an oxidizing agent that takes electrons from other molecules in order to become its reduced form, NADH. NADH can then become a reducing agent that donates the electrons it carries. The transfer of electrons is one of the main functions of NAD, though it also performs other cellular processes, including acting as a substrate for enzymes that add or remove chemical groups from proteins in post-translational modifications.

NAD+ and NADH is the cell of a pair of REDOX, NADH is a reductive form of coenzyme NAD 1, NAD+ is the oxide forms in REDOX reaction, NADH as hydrogen and electron donor, NAD+ as a hydrogen and electron acceptor, involved in alcohol metabolism and other physiological respiration photosynthesis process them as in many REDOX reactions of coenzyme body to participate in the activities of life, and into each other. In the absence of oxygen, glucose metabolism produces very little ATP. Under aerobic conditions, NADH or FADH2 produced by glycolysis and the tricarboxylic acid cycle can produce a large amount of ATP by the oxidative phosphoric acid reaction. 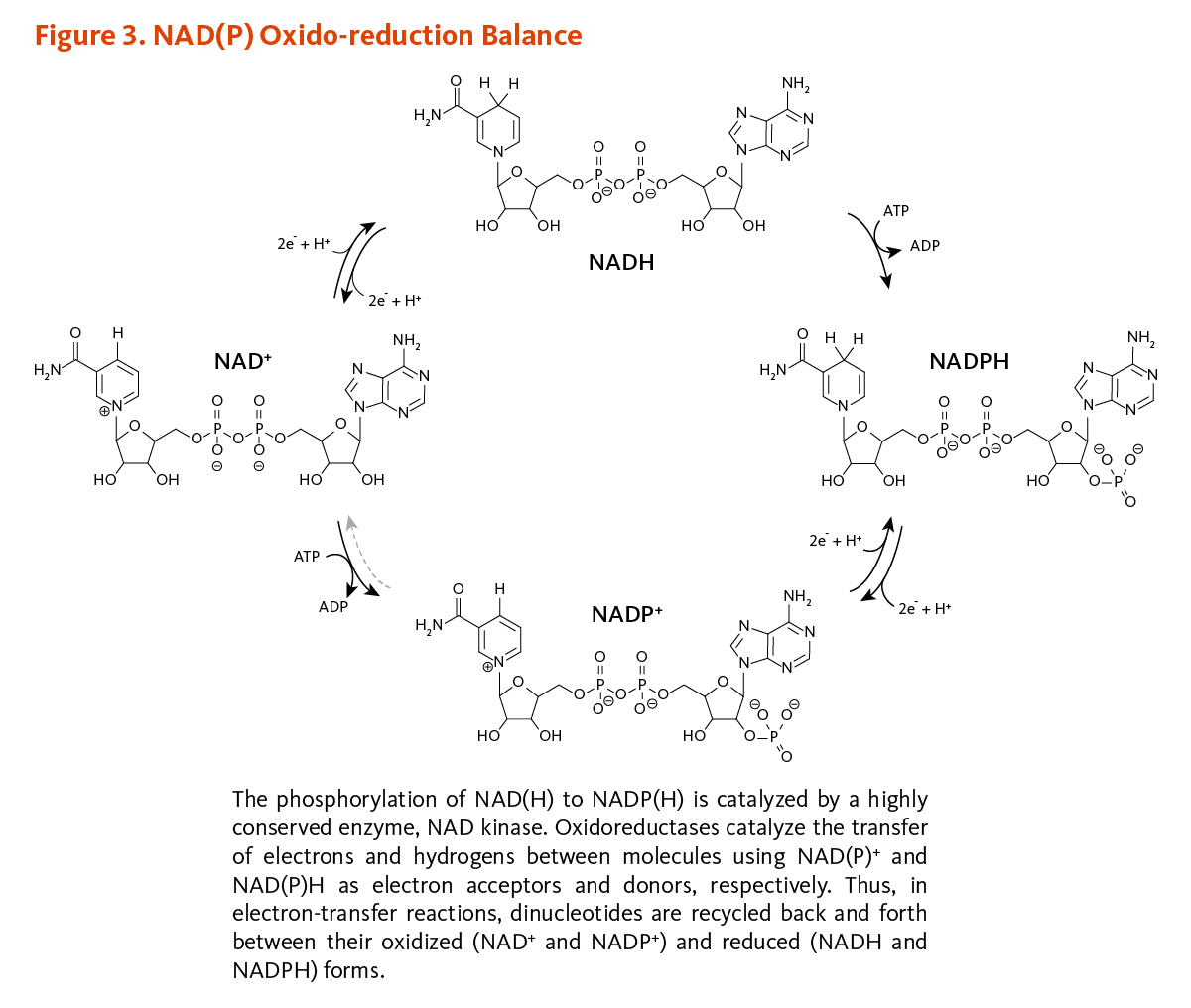