CANADA GEM – Dual-extracted wild Chaga capsules possess verifiable higher potency than similar products on the market, thanks to our Real • Dual Extract Technology (Patent Pending). We are the only company in North America with the lab tests to prove that our dual extraction method is the most effective way to extract medicinal ingredients from Real Canadian Wild Chaga. It allows us to produce Chaga capsules that are unparalleled in the market. With 144 references to Chaga on PubMed over the past 12 years, modern research and uses for Chaga are expanding.

Real • Dual Extract Technology allows our Chaga capsules to contain twice as many polysaccharides compared to the Lingzhi mushroom (Ganoderma). Through the dual extraction process, our polysaccharide content rose up from 8% to over 50%. The process also condenses the Chaga to create a 5:1 extract concentration ratio, maximizing its nutritional value. This dual extraction process is also crucial in retaining phytosterols (which are non-water soluble) such as triterpene and betulinic acid. They have been renowned to interact with mutant cells and pathogen.

With our daily use of cell phones and computers, we are increasingly at risk to harmful radiation from micro-electromagnetic waves. No human studies currently exist, but others are raising red flags regarding radiation. One study showed that male rats who were exposed to radiation had cognitive dysfunction and a decreased sperm count. Chaga contains more Superoxide Dismutase (SOD) than other medicinal mushrooms (refer to the lab test sponsored by Dove Health Alliance US).

Because wild chaga contains a large amount of melanin- neuromelanin, which is not found in other medicinal fungi, its ability to regulate the body’s endocrine system makes it more valuable. Please refer to the following customer’s real blood test tracking report

Medical researchers are beginning to recognize the nutritional value of Chaga’s bioactive medicinal properties. The plethora of beneficial bioactive ingredients only exists in natural fungi. They are rarely found in artificially cultivated mushrooms. This is what makes natural Chaga so valuable. It is one of the most powerful herbs in the world for maintaining a healthy lifestyle. 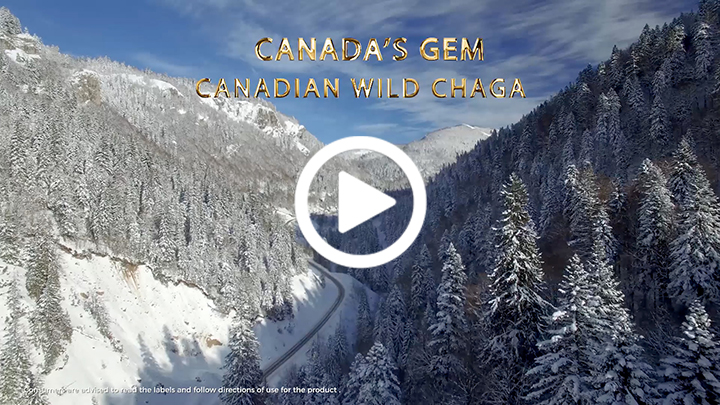 Recommended Use: Source of fungal polysaccharides with immunomodulating properties.

In the Chinese material medica Shen Nong Ben Cao Jing (Pharmacopeia of Shen Nong, ~ 200 BC) referred to Chaga as the “King of Medicinal Fungus.” Centuries later, our Canadian Wild Chaga flourishes in a rural, unpolluted environment up in the mountains of northern Canada, far away from any radiation. At first glance, Canadian Wild Chaga looks nothing like a typical mushroom. The burnt, charcoal exterior of Chaga leads you to believe that the mushroom has been engulfed in flames. On the contrary, Chaga thrives in a chilly climate. The black exterior, also known as the sclerotium, is a major source of human-like natural melanin. Chaga is the only medicinal mushroom that contains an abundance of melanin, further flexing its muscle as the “King of Medicinal Fungus.”

The natural symbioses between the birch tree and the Chaga fungus allow Chaga to draw precious nutrients from the earth. This makes the Canadian Wild Chaga undoubtedly one of the earth’s treasures. It typically takes three to ten years to harvest Canadian Wild Chaga at its proper size.

During the harvesting period, our partners pay close attention to the conservation of our ecosystem, making sure they preserve Chaga for the future. Many people try harvesting Chaga on their own, although a lack of knowledge can be devastating for the regrowth of the Chaga. Those who do not harvest the Chaga properly prevent the mushroom from regrowth, rendering it useless for future generations. By preventing damages to the natural ecology as well as the birch trees, workers only harvest full-grown Chaga by hand and leave the younger Chaga to continue flourishing.

What makes our Chaga capsules so unique is the Real Dual Extract Technology we use to extract the medicinal ingredients. It is an extremely sophisticated, time-consuming, and costly process, which extracts the bioactive constituents from the Canadian Wild Chaga. Without the Real Dual Extract Technology, our bodies cannot absorb and utilize all the bioactive constituents from the raw Chaga. 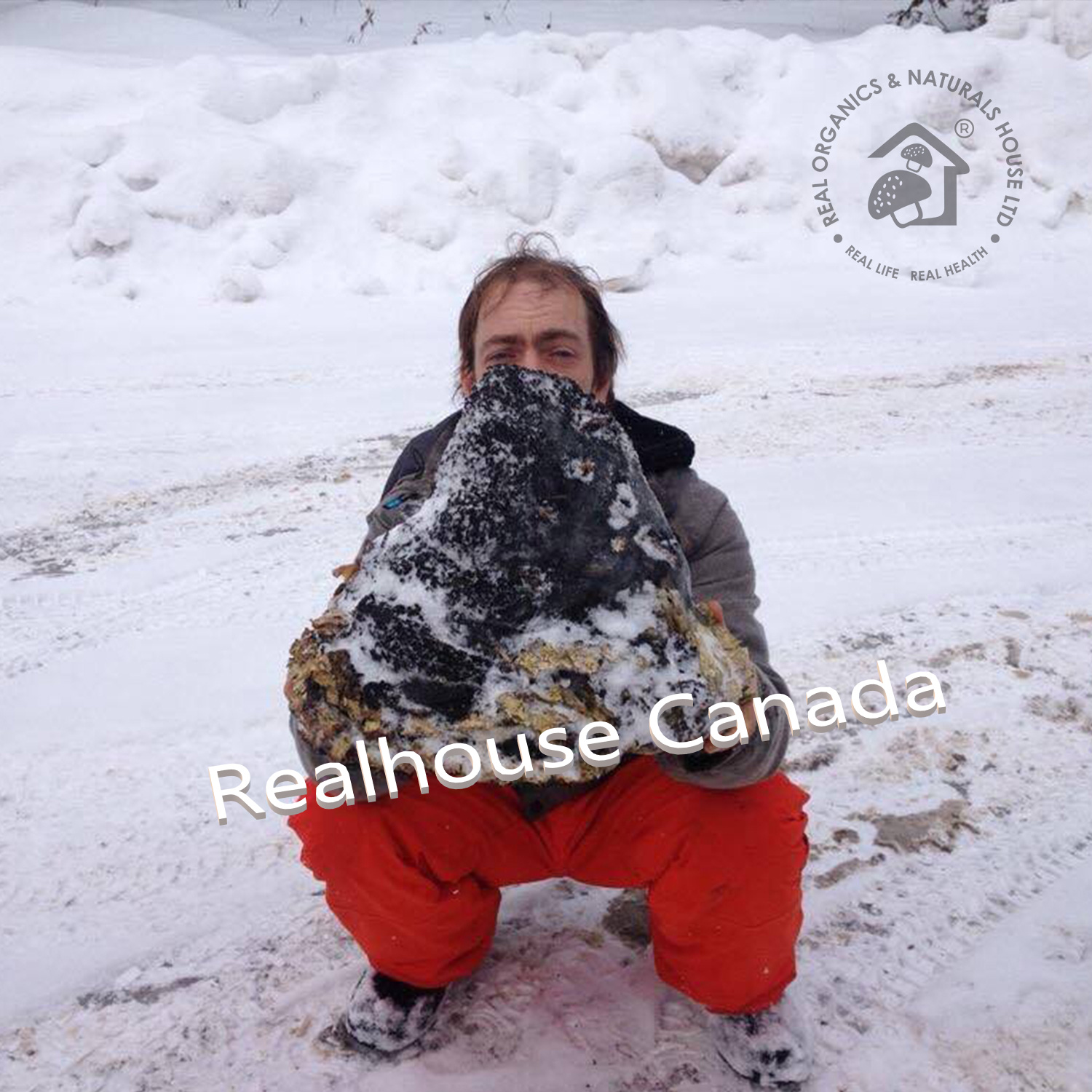 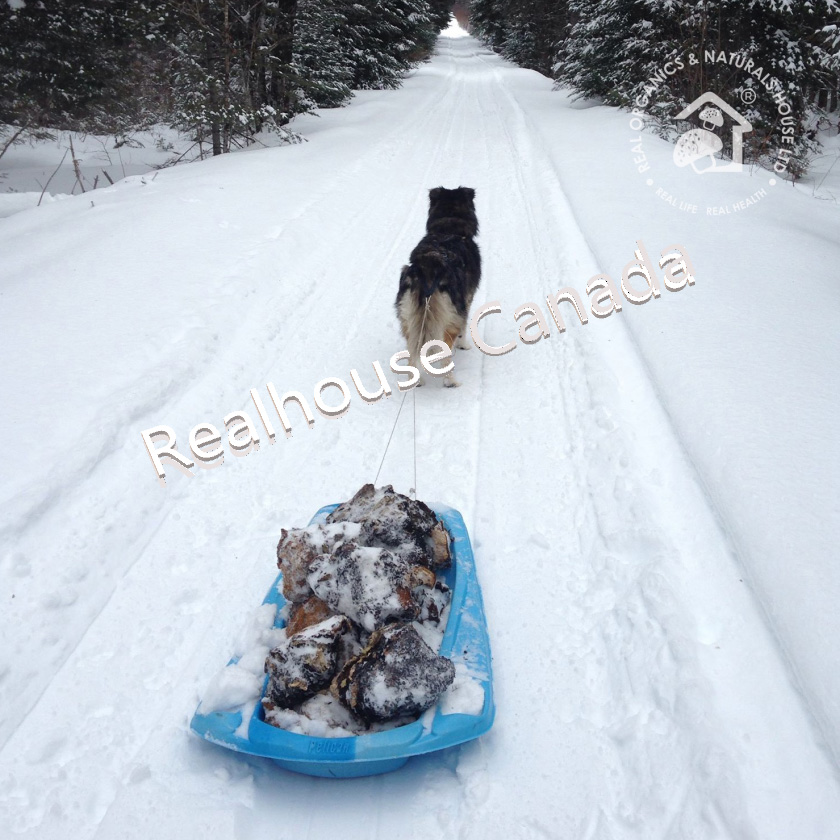 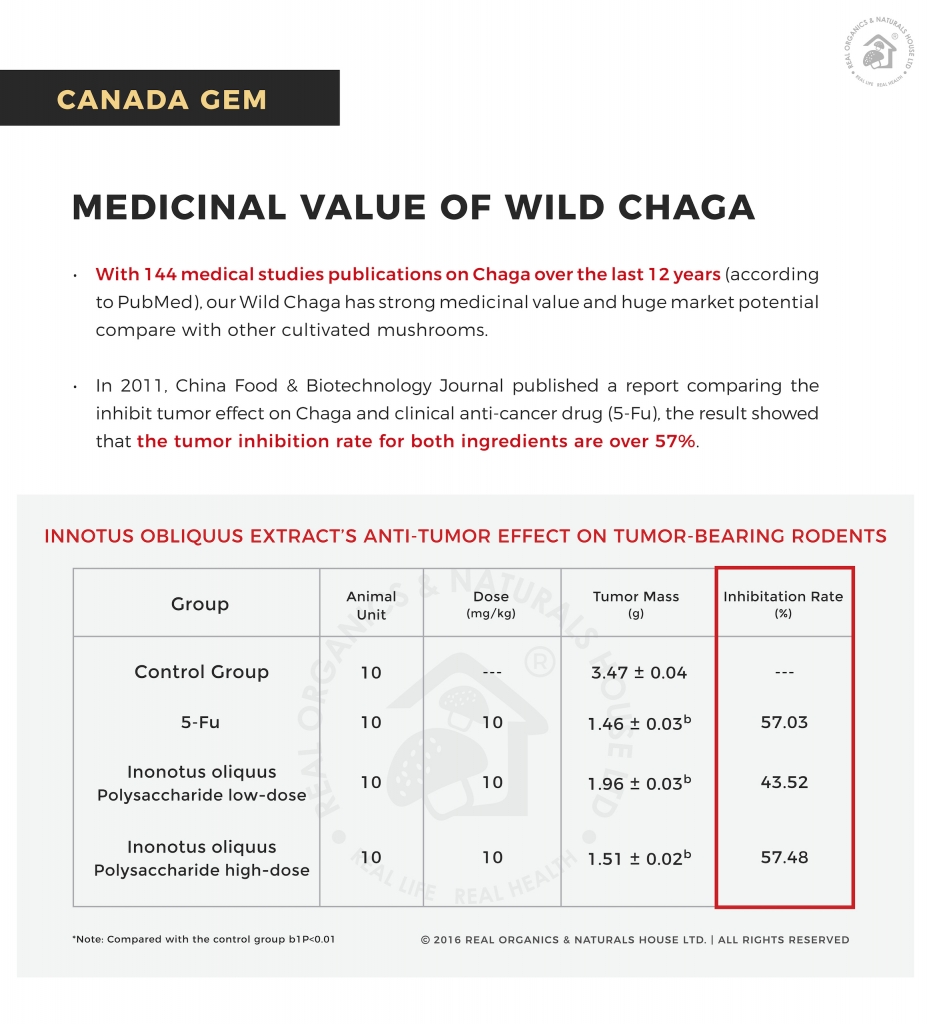 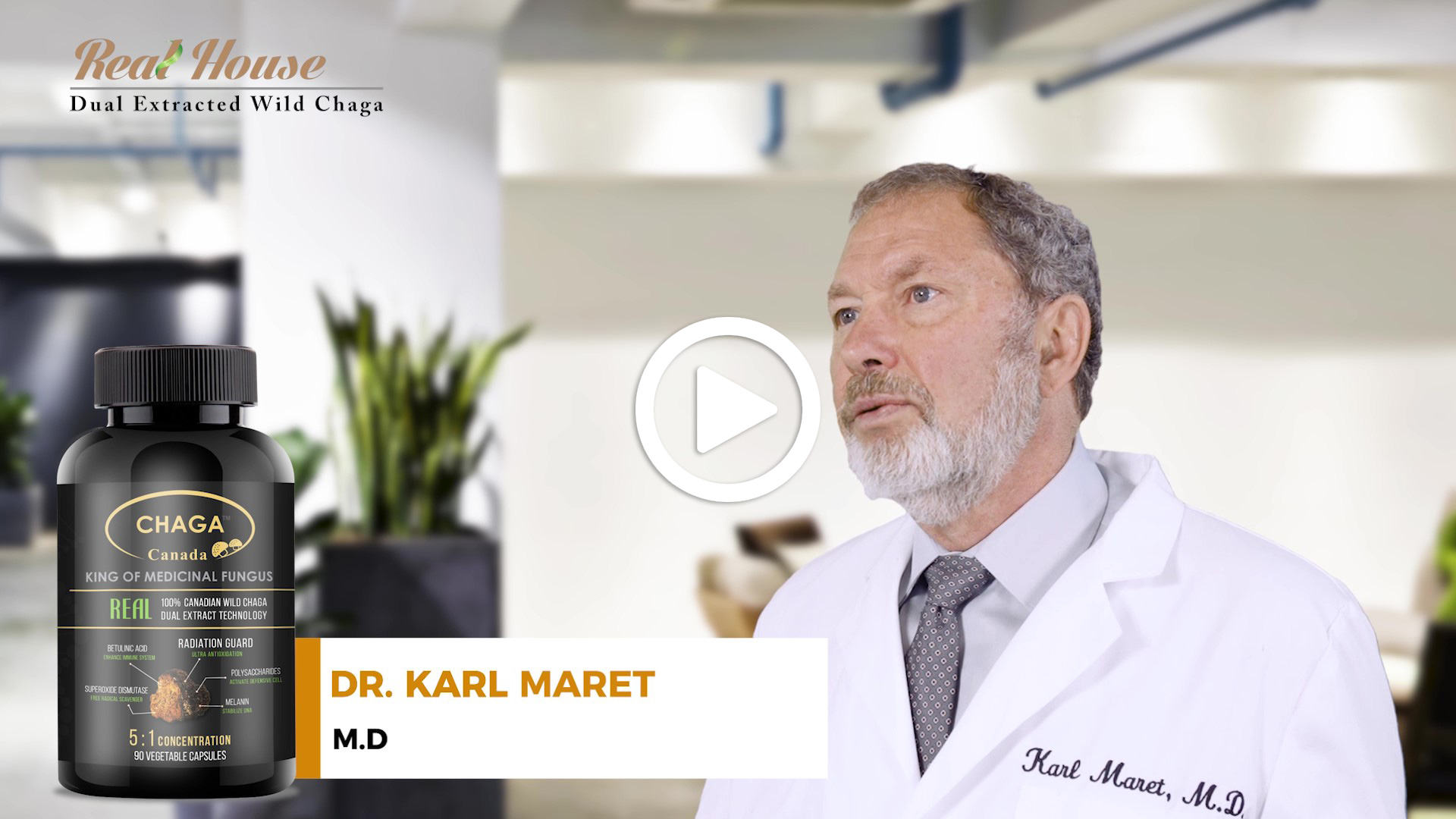 Beta-Glucans  – According to 1996 research, Beta-Glucan involves to the activation of immune B cells and macrophages defense system. In addition, it offers several enzymes that associated with health status.

Plant Phenolics  – Plant phenolics in Chaga may be more potent antioxidants than Vitamin C, Vitamin E, and carotenoids in vitro. It has been linked to resistance to oxidative stress caused by exposure to cigarette smoke UV light, and pollution.

Betulinic Acid  – According to research from the University of Illinois from 1996, high content of Betulinic Acid was found in its Chaga samples. The human digestive system cannot absorb betulinic acid from raw Chaga powder due to Chitin, which is a tough, semi-transparent substance that exists in the cell walls of Chaga.

In 2009, the University of Manitoba proved that Chaga possesses nutritional properties and that it reduces Nitric Oxide Production in a murine macrophage cell assay.

Melanin  – Melanin is one of the most powerful antioxidants existing in nature. Chaga has the highest sources of Melanin found in any food or herb (Cloud ear fungus, black sesame, berries, black-boned chicken, etc.)

Research at the US Department of Energy’s Savannah River National Laboratory, in collaboration with the Albert Einstein College of Medicine, has provided insight into the electrochemical mechanism that gives the complex polymer, known as melanin, its long-term radioprotective properties. While the effect of radiation is associated with damage to the DNA, it is indirect and also associated with the generation of free radicals as well as the induction of oxidative stress. A study published in 2012 in the US National Library of Medicine confirmed the remarkable radioprotective properties of the melanized mushrooms were actually melanin-specific and due to other well-known therapeutic compounds within the fungi.

Melanin plays a role in embryological organization and tissue regeneration. In addition to its relation to homeostatic regulatory systems – autonomic, neuroendocrine, and immunological. Melanin is the main factor of embryos at the beginning of human life.

Various Minerals  – Canadian Wild Chaga is rich in potassium, manganese, magnesium, calcium, zinc, and other minerals. It restores the energy that the body needs to improve the immune system and maintain a healthy balance. Zinc is a critical constituent of Superoxide Dismutase, our most important innate antioxidant. Chaga is a vital source of potassium. Our dual extraction means that High-Potency Chaga Capsules contain more potassium than bananas and other fruits.

1. If you are pregnant or breastfeeding, consult a health care practitioner prior to use.

2. Stop using the product and seek medical attention immediately if you experience any discomfort after use.

3. Sealed for your protection. Do not use it if the seal is broken.

4. This healthcare product is not intended to be used as a substitute for treatment.

5. Store in a cool, dry, and dark place. Keep out of reach of children.

6. Consult a healthcare practitioner if you are taking other health care supplements. 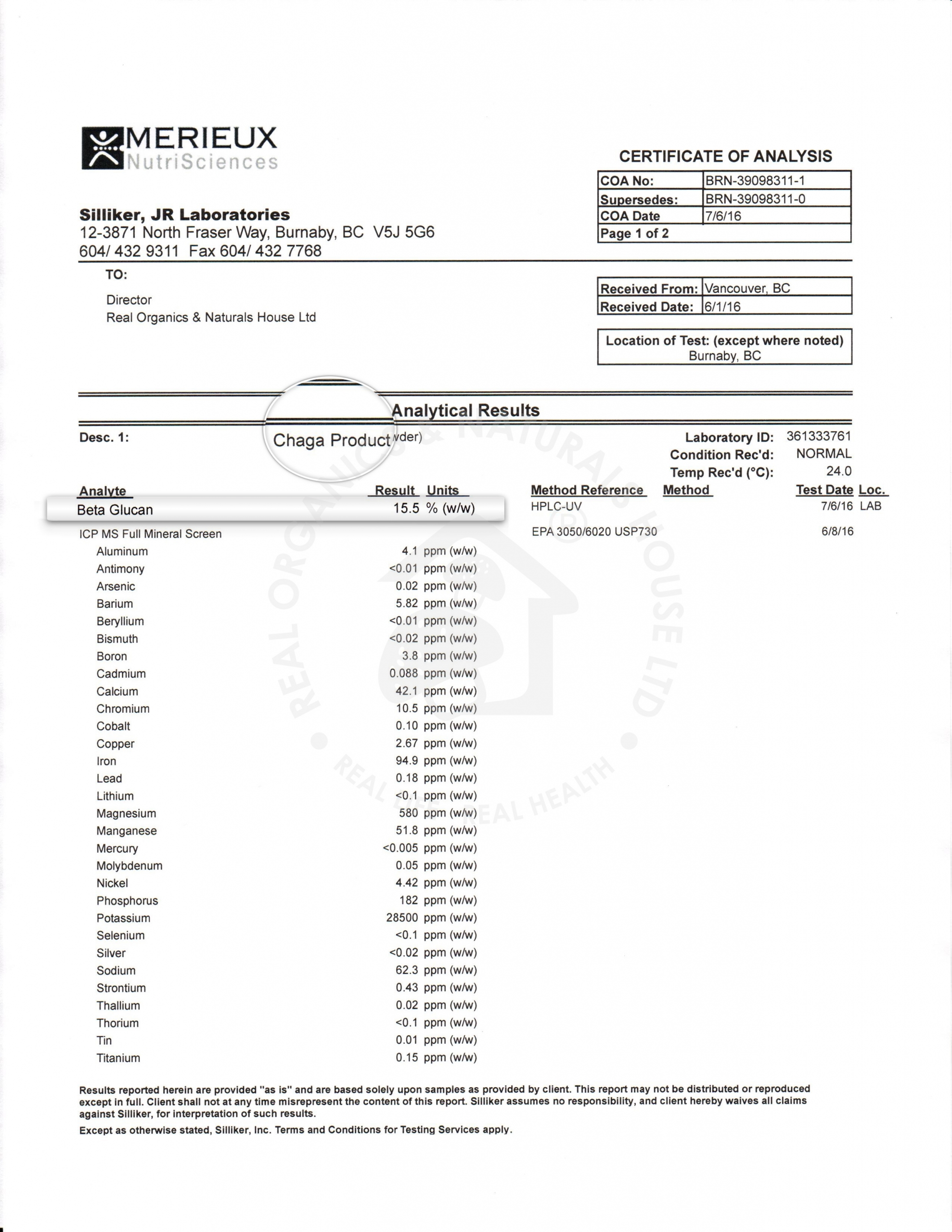 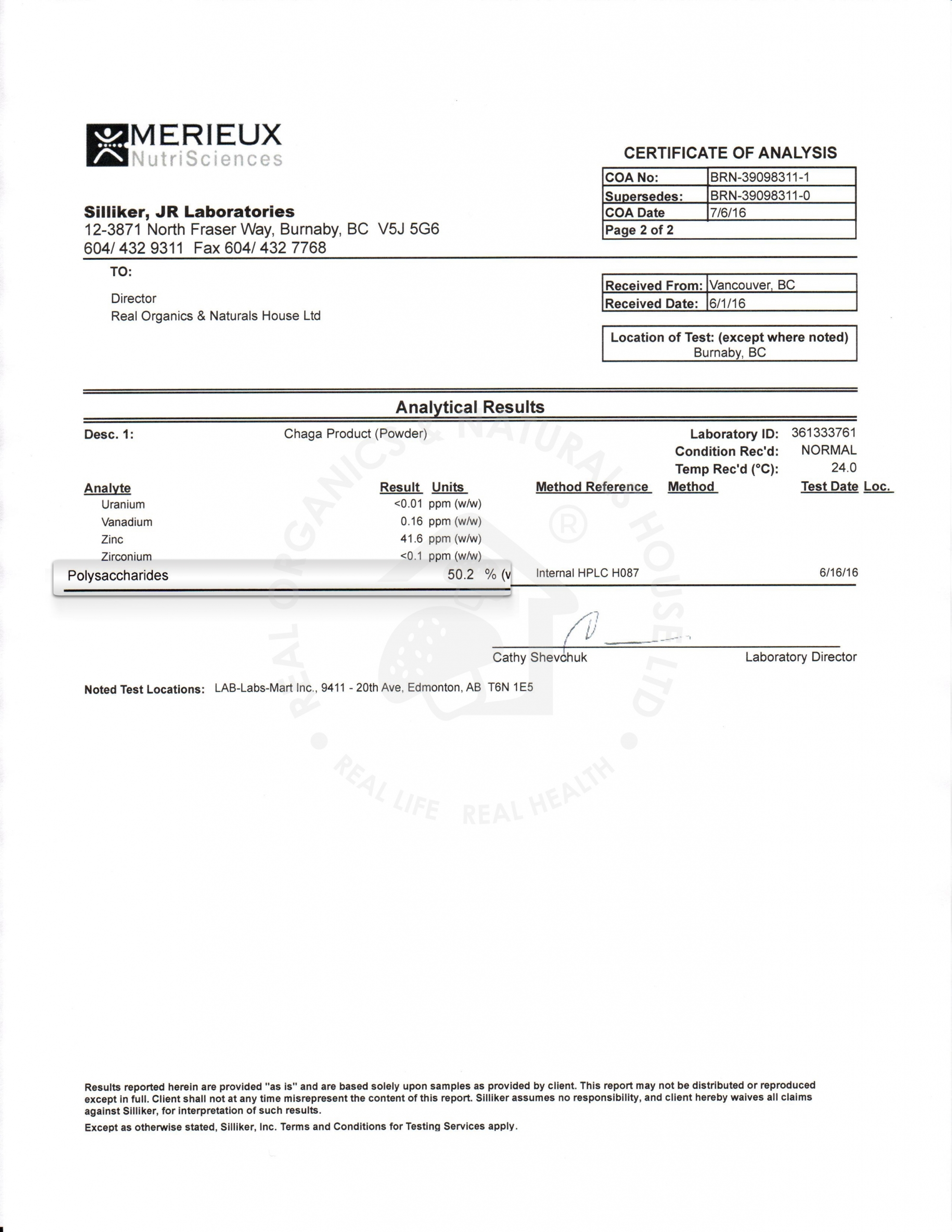